Members of the campus community are invited to

From the Provost and Vice President for Academic Affairs

I invite all faculty members to attend a virtual information session to learn about First Day Complete, a new partnership program between Buffalo

As announced on October 14, Buffalo State College will temporarily house a portion of the estimated 350 Afghan evacuees who are coming to Buffalo

Internal applications are being accepted for the following position on campus. This is an internal job posting open to employees of Buffalo State

With the end of the fall semester quickly approaching, we need to place textbook adoptions for the J-Term and spring 2022 semesters. Currently

The enrollment period for the 2022 Productivity Enhancement Program (PEP) is now open and runs through Monday, November 29. PEP allows eligible

Please join the Chemistry and Physics departments for the seminar "Creation of Environmentally Benign Fluorocarbon Replacements for CFCs,"

Please join the Civic and Community Engagement Office for the webinar "Intentional Procurement: Linking Procurement to Racial Equity and Economic

Experts tell us to begin ramping up our studying three weeks before finals. It's almost time!

How do we ramp up? Find out during our "

To honor Veterans Day this year, Buffalo State Dining is offering some fresh goodies on us! These offers are open to all current and retired 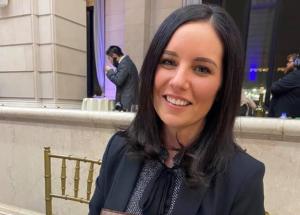 Buffalo State student Joana Leamon, a media production senior in the Communication Department, received the Tim Russert Media Career Award from the Buffalo Broadcasters Association during the BBA's Hall of Fame dinner on November 4. The $1,000 prize recognizes an undergraduate or graduate student who shows evidence of a promising future in radio, television, digital media, or social media.

The award is named in honor of Buffalo native Tim Russert, a lawyer and journalist who spent the last 16 years of his career as moderator of NBC’s Meet the Press.

Applicants were judged on their résumé, a 250-word statement demonstrating commitment to their career choice, a professional letter of recommendation, and a portfolio of work samples.