From the Provost and Vice President for Academic Affairs

'The Way We Were: Buffalo State's 19th-Century History—Politics, Pedagogy, and Architecture' - December 2

The Buffalo State College community is invited to attend “The Way We Were: Buffalo State’s 19th-Century History—Politics, Pedagogy, and

Members of the campus community are invited to submit nominations for the following student awards:

Today is the last day to enroll in the Productivity Enhancement Program (PEP) for 2022. PEP allows eligible CSEA, UUP, PEF, and M/C employees to 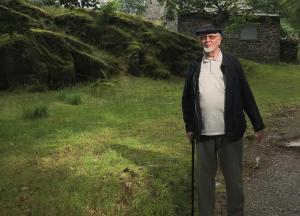 It began with an Irishman and a lost opportunity.

In 1974, David Lampe, Buffalo State College professor emeritus of English, discovered that Irish poet John Montague was in town to teach a six-week summer session at the University at Buffalo (UB), but he wasn’t scheduled to do a public reading.

Lampe not only invited Montague to read from his works at Buffalo State, but he and his wife, Ruth, also outfitted the UB dormitory where Montague, his wife, and infant daughter were staying with a television and playpen...