The Buffalo State College community is saddened by the death of Proves R. Banks Jr., former lecturer in the Technology Department, who died

The State of New York/United University Professions Joint Labor-Management Committees have announced that $77,217 has been allocated to Buffalo

As our campus community continues to adjust to new and innovative ways of working and learning during this unsettling time, we would like to

Nominations are now being accepted for the Celebration of Community Engagement Awards.

Faculty members will enter their fall 2021 grades using Banner. In preparation, faculty members are encouraged to log on to Banner to be sure that

The campus community is invited to the 24th annual Student Art Sale on Wednesday, December 8, from 10:00 a.m. to 5:00 p.m. and Thursday, December

Please join the Civic and Community Engagement Office for the webinar "Establishing a Fund for Anchor Institutions and National Work Initiative: 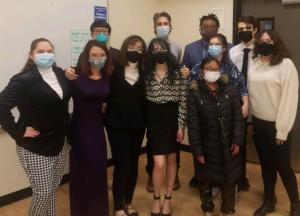 Buffalo State College’s Mock Trial Team competed successfully in the SUNY Geneseo Invitational Tournament on November 20 and 21, led by team co-captains John Quinane (history 2022) and Mimi Byrne (biology 2022). The team’s nine students, who assumed the roles of attorneys and witnesses, triumphed in their final two trials with overall wins against Syracuse University and the Rochester Institute of Technology.

Over 700 teams from universities and colleges across the country will be competing in this year’s national tournaments, which feature a criminal case and an “aggravated arson” charge. This year, the prosecution must prove that the defendant intentionally set a bar on fire, which caused the death of a local firefighter. While the case itself is fictional, the simulated trial is based on the actual Federal Rules of Evidence. The students are given nearly 200 pages of material, including witness affidavits, case law, statutes, pretrial motions, stipulations, and exhibits. It is the students' responsibility to elicit the facts in the case (through nine different witnesses ranging from investigators, forensic scientists, and various eyewitnesses) and argue the law before judges (who are usually practicing attorneys themselves).

The SUNY Geneseo tournament was part of the fall competition season, which culminates in the national tournament next spring. Individual students are scored for their performances as witnesses and attorneys. Total ranks of 16 and higher are usually enough to win top awards at the national competition. Quinane and Jerick Flores (criminal justice, 2024), led the team attorneys in scoring with 16 and 14 ranks, respectively. Grace Gallagher (psychology, 2023) and Byrne led all witnesses with 14 and 12 total ranks, respectively. Jillian Tung (chemistry 2024), competing for the first time, was the top witness overall in her only trial as a defense witness. Maddi Crosby, Lindsey Roth, and Dom Zirpola were recognized for their work as both attorneys and witnesses, and Cait Malilay (also competing for the first time) was named as one of the top witnesses during the final trial.

This February 26 and 27, Buffalo State will host the Great Lakes Regional Tournament for the 12th year in a row. This year’s competition includes students from two dozen colleges and universities from across the multi-state Great Lakes region. More than 80 attorneys from Western New York will be invited to campus to judge the four rounds of trials, and the top teams will go on to compete in the national competition in March-April. For more information about mock trial at Buffalo State, please contact David Ben-Merre, professor of English and Mock Trial coach.