From the Vice President for Finance and Management

Please join the Civic and Community Engagement Office for the webinar "Exploring Core Commitments and Building Blocks of Civic Identity: A

Are you looking for a student leadership position where you can gain experience and earn some income? Buffalo State College undergraduate student 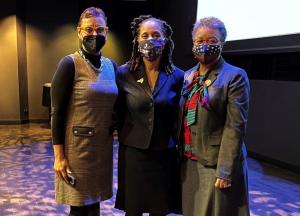 Buffalo State College welcomed Trini E. Ross, U.S. attorney for the Western District of New York, as the 2022 MLK speaker on February 2. The first African American woman to hold this position in Western New York, Ms. Ross was unanimously confirmed by the U.S. Senate on September 30, 2021. In this role, she oversees the prosecution of any federal criminal case brought within the 17 counties of Western New York. She also represents the United States in all civil matters brought within this territory.

Her talk in the Burchfield Penney Art Center’s Tower Auditorium, sponsored by the Equity and Campus Diversity Office, was part of the college’s 150th anniversary celebration and was free and open to the public.