Members of the campus community are invited to submit nominations for the following student awards: 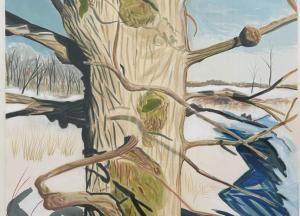 While majoring in art education at Buffalo State, G. Peter Jemison, ’67, had the opportunity to study Renaissance art for a semester at the University of Siena in Italy. He noticed the autumn weather was similar to that of Western New York’s, and he mentioned this in a letter penned to an artist who had visited his painting class, one he greatly admired—Charles E. Burchfield.

“To my surprise, he responded,” Jemison said. “Burchfield said because Siena was roughly at the same latitude as Buffalo, it made sense that Siena’s fall was similar. That’s my memory of Charles Burchfield, an artist I have great admiration for. He was a genius, in my estimation.”

Now a collection of Jemison’s multimedia artwork is intertwined with that of the artist he met as a young man. The arresting exhibition, Shared Light: G Peter Jemison and Charles E. Burchfield, is on display at the Burchfield Penney Art Center through the end of December...

From the President
I have approved the following curricular item, which has been recommended by the appropriate dean, the College